220 Freedom In Christ personnel from 25 countries came together to celebrate the 25th anniversary of the ministry's founding in the USA in 1989 and to thank God for opening more and more doors. Steve Goss, International Director, noted that in 2009 the ministry was operating in 11 countries. Today - just 5 years later - it is in 27. He said, "We are so grateful to the many people who donated financially to enable our Representatives from around the world to attend USA2014. It was a very significant event and used by God to equip a great number of people to share this life-giving message in their country."

A high point of the event was hearing from the founder, Neil Anderson, who was unable to make the last international celebration in the UK in 2012 due to his wife's illness. Neil spoke on how a ministry cannot expand faster than the maturity of its members and challenged us to persevere through difficulties to fruitfulness. 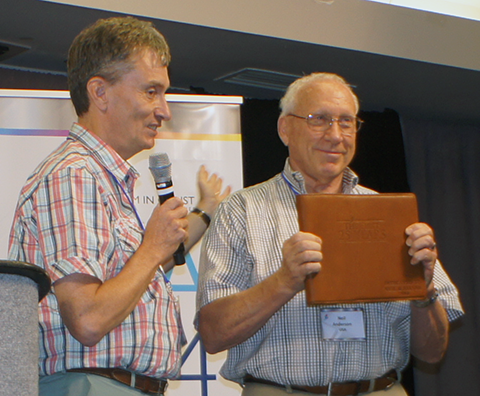 A glossy 164-page book entitled "Freedom In Christ - The First 25 Years" had been published specially for the event with contributions and photographs from people around the world. It is dedicated to Neil & Joanne Anderson and Steve Goss presented a special leather-bound copy to Neil Anderson. A limited number of copies of the book will be available to friends of the ministry from next month.

A meeting of the International Council was held alongside the main meeting. The focus of the Council was on ensuring that new structures to support our offices and representatives around the world are put in place.

It's fair to say that everyone left the event hugely encouraged at what God has done through the ministry, excited about the future and full of thanks and praise for Rich Miller and his USA office team for their amazing hospitality.