Freedom In Christ Italy gets underway


Steve & Zoe Goss have just finished leading three days of conferences in the Milan area with a view to getting Freedom In Christ started in Italy.

Pictured above are some of the 70 or so people who attended. Church leaders came from all over Italy and from as far afield as Portugal and Spain. 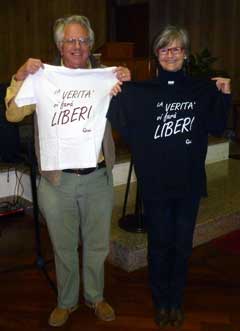 Much of the preparatory work had been done by ex-pat Brits.

Richard Jenks (left) heads up Edizioni Patmos, our publishing partners in Italy. They have already published Italian versions of The Freedom In Christ Discipleship Course Participant's Guide and Free To Be Yourself by Steve Goss. The Discipleship Course Leader's Guide is currently being translated.

Lesley Stroud (right) is a leader in the host church and led a team that did a magnificent job including preparing two meals a day for all the attendees. 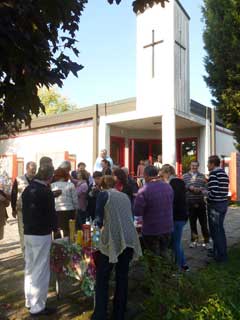 After the main conference for leaders had finished, a meeting was held for anyone who felt that they would like to be part of a team to establish Freedom In Christ in Italy. Around 25 people attended that meeting and plans were laid to move forward and meet again in the New Year.

Around 2,500 Euros needs to be raised to complete the translation of the Leader's Guide.

Steve Goss says, "We were astonished at how God brought together a strategic team of people in advance who made it all happen. It was lovely to see how enthusiastically the message was received. It's extremely exciting!"