Report by Steve Goss:I have just returned from 10 days in South Africa which really couldn't have gone any better.

I've already reported on the Cape Town section of the trip.

We all felt that the meeting was extremely strategic and that the stage is set for many more countries to come on board. As part of the meeting, we talked via Skype with some of our representatives from around the world (in France, Venezuela, New Zealand and Australia) and we approved new applications for representatives in Spain, Portugal and Nepal all of which had been introduced to FIC via the UK office. 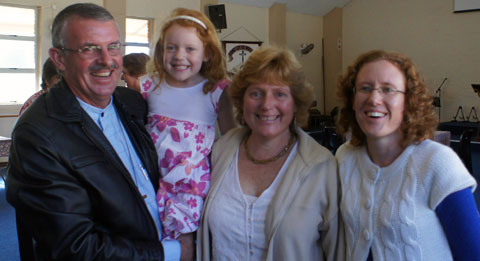 The International Council meets once a year and we always try to pick a location where we can give a real boost to the local FIC representative by running events around the country. Rich Miller ran an event in Pretoria, Roger Reber and I ran an event in Cape Town (see previous report), Isaac Manogarom ran a conference for an Indian congregation in Durban and Neil Anderson and I spoke at an event in Jonothan's church (he is a Methodist minister) in Durban. Neil then addressed the annual meeting of the Association of Christian Counsellors in South Africa which took place in Pretoria.

The events were well attended and enthusiastically received. Many churches are already running the Discipleship Course and we expect many more to follow. You can see some encouraging comments on our Facebook page.

I was blessed to be invited to preach at Jonothan's church twice on Sunday before leaving (though I've never before preached at a service quite so early - they meet at 7am and 8.30am!). I spoke from the first session of the new course on Grace that we are developing for release next year. Unusually for me, at the later service I felt it right to call people to the front if they wanted to respond to the message and was humbled to see so many come forward that there was no more room at the altar rail.

I could really feel the prayer support from our intercessors and those who receive our monthly prayer letter. All in all, it was a great trip and a real privilege to be there.